E.H. Tylor Jr is considered by many to be one of the founding fathers of the modern-day Bourbon industry. A true pioneer who fought for advancements in the industry, insisted on regulation for the purity of Bourbon and was ahead of his years with his views on how a distillery should run. In 1986 he bought a small Leestown distillery and named it O.F.C. He introduced copper fermentation tanks, column stills and a first of its kind steam heating system that’s still used in warehouses today.

This E.H. Taylor Small Batch Whiskey has been aged in the same century old warehouses built by the man himself. Each barrel is carefully selected to create a perfect blend that honours the legacy of E.H.Taylor Jr.

Click me to learn more about the Buffalo Trace distillery

Tasting notes
Nose – Corn, Vanilla, Cinnamon and Caramel with light floral notes
Palate – Sweet Corn, Brown Sugar and Butterscotch with light Oak over Citrus with a little Mint
Finish – More oak, a little tobacco more of the butterscotch and then the rye spices lingering on 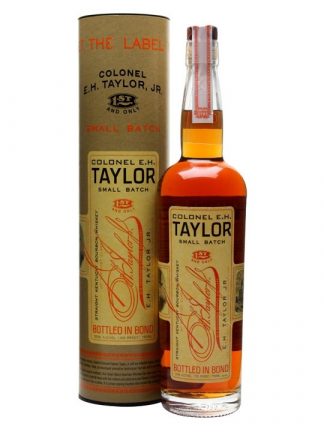