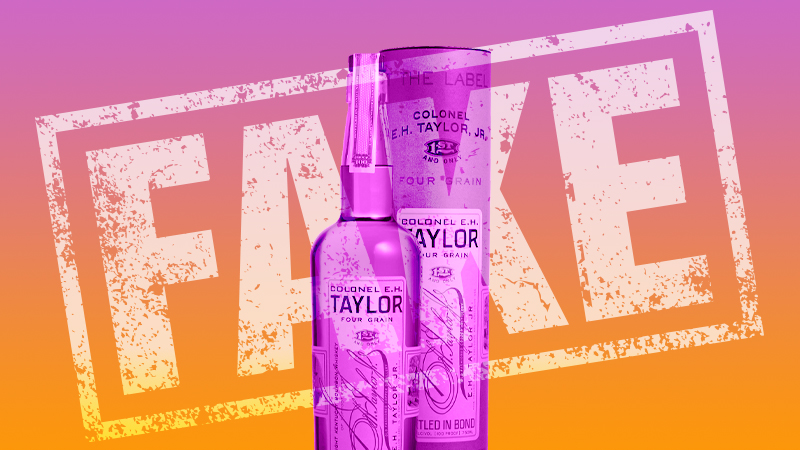 Acker Wines, America’s oldest wine merchant, is no stranger to controversy. Only a few years ago it was caught up in a counterfeit wine scandal. It’s now been caught out again selling Fake Bourbon Whiskey for nearly $1000.

Inside Edition, an American investigative television program sent an undercover reporter into Acker Wines. They were then sold the, potentially counterfeit, Colonel E.H. Taylor Four Grain Bourbon. On the face of it, it’s a bottle with a recommended retail price of no more than $80. The reality is that this Buffalo Trace Distillery produced bottle was a limited edition and is in great demand and can demand prices upwards of $3000.

The bottle was purchased and send to Buffalo Trace’s headquarters, by the Inside Edition producers for validation. Missing important “Lot code” markings, placed on the bottles by the distillery to identify batch information, it immediately aroused suspicion. When testing the proof of the liquid, the distillery team confirmed that they did not believe the contents were made by Buffalo Trace. In video footage, Buffalo Trace Technical Director John Medley, also claims that the strip stamp around the neck was attached incorrectly. He also mentions a missing tube box, something that should accompany this particular bottle.

During the early parts of the investigation, an Inside Edition reporter can be heard asking if the bottle is genuine. The store manager overtly responds that it is. On returning to the store with the findings, the manager became evasive. He refused to engage or respond to the allegations.

“All that glitters is not Gold” could be the moral here. It’s hard to say whether or not Ackers was intentionally selling fake products or whether they missed it themselves. That is something that shouldn’t happen within a highly experienced buying team and the knowledge Ackers has.

Check your bottles folks and buy from dealers that you know and trust.